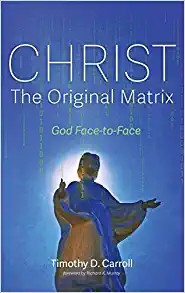 The first chapter of Timothy D Carroll’s book Christ – The Original Matrix describes his concept of the Matrix: Carroll proposes that the universe is a matrix of ideas which are an expression of an infinite God, a source of life that holds all things together, and that the original matrix is Christ of God. He states that the mystery of Christ in you is that God resides deep in the soul of everyone. Carroll goes on to explain that we are never separated from the Spirit of God. Humanity and divinity are forever connected, as humanity is part of the life of God and being outside of the Oneness of God is not possible. Carroll believes, “certain parts of Christianity got it more accurately than other religions.”

After the first chapter the book becomes very similar to other books asserting Christian Universalist concepts. It may be a good choice for someone interested in Christian Universalism who wants a concise Biblical overview of CU, including many quotes from early Christians, as well as later theologians.