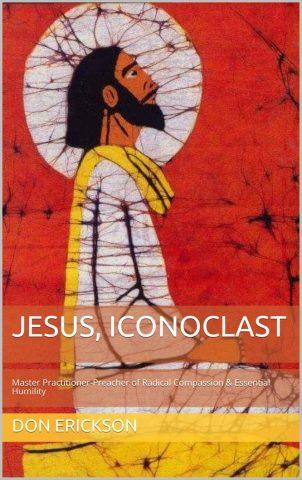 Jesus, Iconoclast: Master Practitioner-Preacher of Radical Compassion & Essential Humility examines the iconoclastic life and ministry of Jesus of Nazareth. From the “riches in the rags” story of the nativity to his compassion-moved sacrifice to save his disciples, this book reflects on Jesus as a social and religious outcast who in turn ministers first and foremost to fellow outcasts, knowing they heard him most clearly because he embodied them.

Jesus, Iconoclast shows that the humility embodied by the misfits, outcasts, and “the vulnerables” in society was for Jesus the benchmark for inclusion in God’s Kingdom. The book also looks at Jesus’ approach to religious pluralism, a reality he experienced in ancient Palestine under Roman rule. It was an approach that evidenced Jesus pointing to expressions of compassion rather than to mere faith. In addition, the book examines the story of Jesus’ death and resurrection, offering a view that both asserts the centrality of the Passion but also bases it in context and avoids universalizing it away. The crucifixion itself is shown to be a portrait of embodied, representative compassion that is salvific in its reach. Inspired by the powerful teachings of liberation theology as well as a Buddhist-influenced approach to the gospels, Jesus, Iconoclast: Master Practitioner-Preacher of Radical Compassion & Essential Humility gives a fresh, poignant portrait of Jesus that defies Trump-America’s glossing over and ignoring of Jesus’ radically compassionate life and teaching.

The author  is a pastor and poet with some 20 years of experience. He is a graduate of Union Theological Seminary in the City of New York and a student of Dr. James Cone, iconic originator of Liberation Theology. He is also a serious student of Buddhist philosophy, formally studying Korean Buddhism in South Korea and practicing as a Buddhist layperson under now-deceased Zen teacher Thich Giac Hai. His formative years were spent in the Evangelical tradition, capped by three years at an Evangelical Christian college in Southern Ohio. In the early 1990’s, he left the American Evangelical tradition, transferred to a public university, and began an academic study of Religion. He has a Bachelor of Arts in Religious Studies from North Carolina State University and a Master of Arts in Theology from Union. Above all, Rev. Don is a lifelong student and disciple of Jesus of Nazareth and is continually inspired and transformed by his teaching, his life, his death, and his life and death as a teaching.