On April 8, the Community Church of North Orange and Tully hosted an ordination. The now “Reverend” Peter Stilla was ordained by the Christian Universalist Association (CUA), a religious organization that this past summer celebrated its 10th year of existence. Compared to its older and larger cousin, the Unitarian Universalist Association, deemed by many within that tradition as “post-Christian,” the CUA is specifically Christian based. The CUA’s central focus is its profound adherence to the ancient yet still living Christian teaching known as Universal Restoration. This teaching proclaims that all of creation will be restored to her Creator, human beings included. The teaching doesn’t rule out the notion of hell, but it is hell as more of a temporary incarceration to correct behavior and restore the spirit than an eternal whip to punish a person or destroy the spirit. This teaching is found in the New Testament. It was systematized as early as the 100s in the theology of Origen, the original systematic theologian of the early church. The Eastern Orthodox Church still deems Universal Restoration as a Christian hope and has never proclaimed the teaching as heretical. Hence, central patriarchs of the Eastern Church — Gregory of Nyssa, Isaac the Syrian, Evagrius Ponticus, etc. — were clear in their view of Universal Restoration.

The CUA is a group that makes a faith out of the hope millions of Eastern Orthodox Christians still hold, that all in the end will be restored to a loving Parent God and that “no one will be left behind.”

The CUA as an organization for the past 10 years has focused on growing the movement. It has a growing web and social media presence. It can easily be found on Facebook and its website — christianuniversalist.org — perused. The CUA has also been training and ordaining its own clergy. Rev. Stilla, Rev. Jim Egbert, CUA minister and member of the Board of Directors who was there representing the CUA, and myself make up three of 32 ordained CU ministers. This number continues to grow, as does membership and mass appeal.

The growth of the CUA is another piece of evidence pointing to the reality that Christian Universalism is having a moment. In addition, there is a Netflix movie titled “Come Sunday” that centers on Bishop Carlton Pearson, a Black preacher who converted to the “Gospel of Inclusion.” This summer, a documentary will hit theaters titled “The Heretic.” The film focuses on the life and teaching of Rob Bell, who revealed his Christian Universalist bent a few years ago in a book titled “Love Wins” and was excommunicated for it by most Evangelicals. 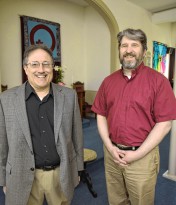 In Providence, R.I., this weekend, there is conference going on titled “A Door Standing Open,” facilitated by George Sarris, an Evangelical Universalist and author of the controversial yet popular book “Heaven’s Doors.” Public theologians like Richard Rohr, Brian McLaren and Brad Jersak are implicitly and sometimes explicitly Christian Universalist in their persuasion. There are churches in the country that preach Universalist salvation. But what is missing are more specifically CUA churches, which CUA admits and aims to realize. There are now just two.

The sign in front of the Community Church of North Orange and Tully (CCNOT) reads “Universalist Congregational.” The sign points to the historical roots of the old 1782 meetinghouse. The handsome building sits in the middle of what local historian Lloyd Taylor calls “Universalist country.” The area — namely, Warwick — represents one of the birthplaces of the Christian Universalist movement, which dates back to the late 1700s. Christian Universalism once thrived here. A source of historic pride at CCNOT is that in 1800, the General Convention of the burgeoning Universalist Churches of America was held “in-house” at the North Orange church.

For the CUA, the sign in front of CCNOT, and the history it represents, points to the future.

As for Rev. Stilla’s ordination on April 8 in North Orange, it was a good day. It was a good day to celebrate the truly good news: that, in the end, the love of God will reach into each and every heart and transform and restore them to Father-Mother God, who stops at nothing to save all. Thank you, Jesus! What “gooder” news can there be than this?